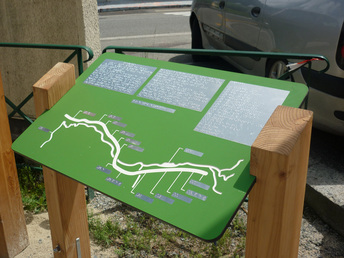 The landscape of the Gaves Valleys is characterised by the diversity and beauty of its natural sites which blend harmoniously with the sites shaped by human activities. The Gaves Greenway is a privileged access route for discovering this region.

Tourist signposting, present over the entire 18 km between Lourdes and Pierrefitte-Nestalas, offers the opportunity to discover and visit the villages passed through, as well as all the main natural and heritage sites.

An interactive map of the Greenway offers an initial overview of the route: click here.

You can also see the path on Google Maps.

Continue your excursion to Cauterets!

Since 2005, the Gaves Greenway has been extended beyond Pierrefitte-Nestalas to Cauterets. This mountain greenway, called the "Chemin des Voyageurs” (Travellers’ Path) follows the former PCL tram route between Pierrefitte-Nestalas, Cauterets and Luz. This magnificent 10 km route winds its way through gorges on its way to Cauterets and passes through a floodlit tunnel and over the Meyabat Bridge. With a large altitude difference and a steep route, this Greenway is mainly suitable for pedestrians and mountain bikers. For further information, click here

Paths and routes departing from the Greenway

Along the length of the Greenway, you will be able to continue your discovery of the region by means of the nearby paths and routes: the Lavedan paths, mountain biking paths, and the paths along the Banks of the Gave de Pau.

You may also travel as far as Tarbes by taking the Greenway from the roundabout of Europe in Lourdes. This path will provide a connection to the Trait Vert network of paths. Link to Greater Tarbes

If you want to discover the other hiking paths and cycling and mountain biking routes in the region, visit the Pays des Vallées des Gaves website.

To prepare your stay in the Gaves Valleys, do not hesitate to contact the region's Tourist Offices: rubrique contacts